This is psychological torture.

This is the very first Smearing website put online by Kory & Allison Read on November 2, 2017 and it was renewed for another year on Nov 3, 2021. Kory Read is the perpetrator of this torture online within various domains. There is no doubt anymore that this is their intention. This is ALWAYS the Bullies INTENTIONS!

It appears that Luigi Liscio and his son Anthony Liscio have finally had enough of the negative publicity and attention that come with protecting Stella Reddy and keeping her enballer husband Russell Reddy employed in their building.

Let us note that it only took 4 years for them to finally get rid of the racist Stella Reddy that they stood behind and encouraged and enabled her racist behaviour.

But like all things in life. All good things have to come to an end!

Luigi Liscio and his son Anthony Liscio like the true racist they are, even turned on their own Stella Reddy and “force” her out and back to Newfoundland.

But rest assured, this website will not be coming down at any time, and I will start adding to it. We can’t have racist like Luigi Liscio and his son Anthony Liscio get rent from non-whites and these same individuals not know they type of people they are paying their rent too.

Remember Luigi and Anthony, there is consequences for your actions.

This shows without a doubt that they will do what they want, no matter what. It also shows their determination to incite hate against the property owners, it current tenants, and the new staff living and working there. Try as he might though, I know his antics are not getting him anywhere as no one believes them. If they did, I would not be sitting here typing my own website!

People tend to look for evidence when someone accuses someone of something and there is none.

The words above were directly copied from 859kennedyroad.com and fit the description below of a perpetrator of torture!

Kory Read implies he is on the moral high ground, that the citizens of Ontario are under threat and they are the the only people who can protect others from the racism and discrimination they perceive was given to them from the owners and staff at this property. They believe it is their job to inform the general public of their personal opinions about the people he is warning others about.

Kory Read has made himself to be Judge, Jury, and Executioner. Kory Read is the Perpetrator of Torture!

Kory Read is telling you that all the people he has named within his domains are something they are not, like being a racist.

Kory Read is telling you that I am “crazy“, “a white supremacist”, “a racist”, and other names, when I am not.

As for losing my mind, that did happen but of course Kory Read will never admit it was HIS ACTIONS that caused my mental health issues. He will never admit that he was the catalyst for my Complex Post Traumatic Stress Disorder, yet there it is in the symptoms below. The deep distrust in other people is what I fight with daily, even now.

All you need to do is read any one of these domains they own online to see the psychological torture they inflict! All under the guise of “This site was created as an information sharing site to alert the public”. 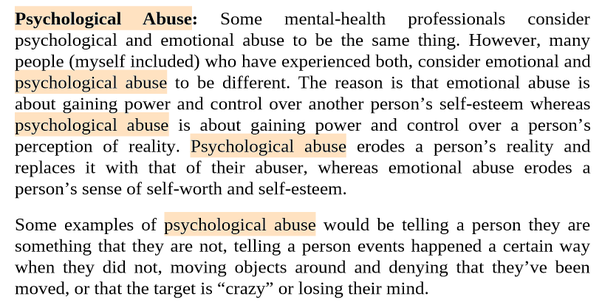 The perpetrator of torture

Research during the past 60 years, starting with the Milgram experiment, suggests that under the right circumstances, and with the appropriate encouragement and setting, most people can be encouraged to actively torture others.[1]

“When torture takes place, people believe they are on the high moral ground, that the nation is under threat and they are the front line protecting the nation, and people will be grateful for what they are doing.“[2]

Stages of the perpetrator’s torture mentality include:
(Please note that not all perpetrators go through all of the stages listed)

The effects of torture on the victim and the perpetrator are likely to be influenced by many factors. Therefore, it is unlikely that providing diagnostic categories of symptoms and behavior will be applicable across countries with very different personal, political or religious beliefs and perspectives. There is always a question about applying diagnostic categories and descriptions of symptoms or behavior developed in Western societies to people from the developing countries with very different personal, political, or religious beliefs and perspectives. One of the most marked cultural differences may occur between individualist societies where realization of personal goals often takes priority over the needs of kin and societal expectations, and collectivist societies in which the needs of family and prescribed roles take precedence over personal preferences. Another evident difference is the belief in a subsequent life in which suffering in this life is rewarded, and this has emerged in some studies of torture survivors in South East Asia.

Torture has profound and long-lasting physical and psychological effects. Torture is a form of collective suffering that is not limited to the victim. The victims’ family members and friends are often also affected due to adjustment problems such as outbreaks of anger and violence directed towards family members. According to research, psychological and physical torture have similar mental effects. Often torture victims suffer from elevated rates of the following:

No diagnostic terminology encapsulates the deep distrust of others which many torture survivors have developed, nor the destruction of all that gave their lives meaning. Guilt and shame about humiliation during torture, and about the survivor’s inability to withstand it, as well as guilt at surviving, are common problems which discourage disclosure. Additional stress may be added due to uncertainty about the future, any possibility of being sent back to the country in which the survivor was tortured, and the potential lack of close confidants or social support systems. In addition, the presence of social isolation, poverty, unemployment, institutional accommodation, and pain can all predict higher levels of emotional distress in victims who survive torture.[5]

This sentence below I copied highlights where Kory Read is engaging in psychological torture! This sentence is Kory Read telling you that his intention is to ostracize me from society by creating guilt and shame within me over the severe humiliation they put me through with these domains online. It is complete social isolation he is attempting to do to me and all on a personal level. All out of Revenge, for evicting them for their own actions!

It does not matter; the point here is that Stella Reddy is in a continuous losing battle because, in the end, everyone who searches her name from friends, family, or future or current employers and co-workers, will all see the truth about her and will deal with her accordingly. https://stellareddy.com/oops-i-did-it-again/

As another blogger on Bullying says, knowledge is POWER! I have gained the knowledge to put this Smear Campaign and severe Bullying online in perspective. It took awhile, but I finally got clarity and know what I need to do. Just be myself and live my life as I now know nothing they say or do, no matter how many domains they make, it will not affect my life anymore.

There will always be others out there judging someone else, no matter the reason as I have learned it is their way of feeling better about themselves.

By posting this all online Kory Read hopes that someone will DO something to me or someone else named in his domains over his lies but he don’t see that it is only hurting them. Their actions against so many will always remain online, even when these domains are long gone, and I hope they are used as a warning for others to AVOID these people. I hope my story will be a warning to everyone to stay away from Toxic people like this.

Kory Read & Allison Read will target you too.